These ideas were developed by me for my local group and are not a part of the official Little Flowers Girls Club ® created by Rachel Watkins. To purchase the excellent materials and begin your own local group, please visit www.beholdpublications.com 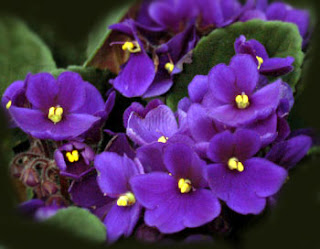 Our Little Flowers meeting on Prudence was Friday. It was enjoyable, as always! This time we shared lots of stories. I did not realize how many I had included in the plans until halfway through the meeting, but it didn't surprise me. I love a good story!

We opened with our usual prayers of an offering, a few spontaneous words, a Hail Mary, and the St. Therese song. Then, I spoke to the girls about Prudence. Initially, I thought this would have been really hard to explain to elementary-aged children, but I think it went pretty well.

I shared that prudence basically means choosing carefully the right thing to do. I mentioned it is a cardinal virtue, a gift given at Baptism, that we can use or lose as we grow up. Since our next virtue is Wisdom, I explained how Wisdom is a tool to help us be prudent. I named other tools and had the girls identify which were virtues we have already practiced in Little Flowers (obedience, love of God, truthfulness).

Then, I explained why I thought the African Violet was such a good choice to go with this virtue. None of the other virtues can be practiced without Prudence, and the African Violet is known as the world's most popular houseplant. So, Prudence must be present in our daily lives and watered every day, just like the flower!

Using the Little Flowers Leader's Manual, I identified the three parts of Prudence - think
carefully, decide wisely, and act accordingly. We held up three fingers and chanted: "Think! Decide! Act!" several times, so the girls could remember the steps. I asked them to then help me explain each part.

Think means look at the consequences of our actions. It is important to stop and think before acting. This is where we need to think about what Jesus would want us to do and ask either "What Would Jesus Do?" or "Will this help me as I seek eternal life?" Decide means make a choice. Sometimes this means being obedient to rules. Act means do what we decided. I gave a silly example about thinking about having chocolate cake for breakfast and deciding to have cereal instead but finally taking out the chocolate cake and eating it.

Next, I shared two stories with the girls, two of Jesus' parables that illustrate prudence. First, I used this object lesson to try to demonstrate the Parable of the Wise Man. I had a pan with a rock and a mound of sand, but my cup-houses were too big. So, the one built on rock kept tumbling off when it rained, and the one built on sand sunk into the sand instead of falling. We laughed, but the girls remembered the Bible story and correctly identified which man followed the three steps of Prudence.

Finally, I read the Parable of the Ten Virgins from The Parables of Jesus

by Fr. Lovasik, and the girls again identified the three steps of Prudence. This story went along with our craft, so we moved on to making these Tissue Paper Votive Holders from Oriental Trading Company. They turned out so cute, with the older girls making elaborate patterns and the younger ones making collage-style ones. I gave each of them an unscented tea light to put inside, too! 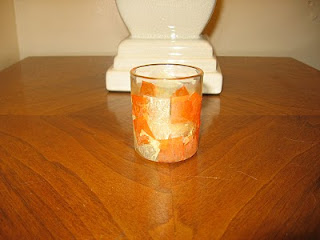 Next, we played two versions of a common game. I had the girls sit in a circle, and we imagined we were taking a trip to Antarctica. Each girl had to make a prudent decision on something useful to take with us and name each of the previous girl's items as we went around. It was fun to see what they chose. My favorites were "ten pairs of pants" and "a tent with a heater." The second time around, we imagined we were going to the beach instead and each girl prudently chose something to take that started with the next letter of the alphabet as we went around the circle. These were simple but fun games that had the girls thinking about making good decisions.

Snack was next, and then we divided into our three rose groups based on age for a short discussion. Each group had a copy of these two (1 2) stories to read and discuss. I instructed the moms in each group to stop where it says WWJD and ask the girls what prudent decisions could be made in each situation. The youngest girls only did the first story. Afterwards, I pointed out that there are often more than one prudent choice, so we should not feel like there is always one answer.

We gathered back in our large group, so I could share about St. Angela Merici, the saint chosen for Prudence. Once again I used my wonderful Sixty saints for girls

book by Joan Windham. These stories are SO wonderful! To keep the girls' attention I had made a few quick and easy felt board pieces that went along with the story. I printed images on card stock at home and stapled felt to the back of them. I am so glad I did this, because this was the fifth story the girls heard. You can see them below (although I have tried three times to upload this after rotating it - sorry for the neck strain!): young St. Angela, three headstones, hayfield, moon, ladder, and nun St. Angela. 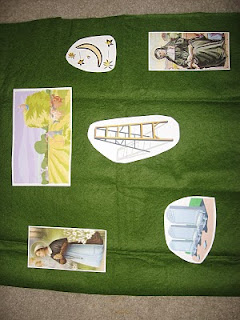 To wrap up, the girls made their Prudence virtue pages to add to their collection. One of our families brought their collection of craft scissors that cut all kinds of fun edges, so most of the girls used those to spruce up their page. My sample below was made at home, and I forgot we even had some of those scissors! I'll have to pull them out for our next meeting. 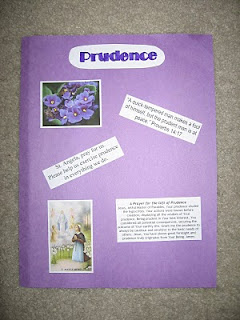 As usual, we sang the Scripture song for Prudence, an easy, short one, and talked about our patch projects (you can download our idea sheets below). I had the girls who wanted to share tell us what they were sacrificing for Lent and reminded them that every time they make that sacrifice, they are practicing Prudence. Our closing prayers were the St. Therese prayer, intentions the girls wrote down, and asking for the intercession of the Wreath II saints. Finally, I distributed patches.

If you are a part of our group, please note that I have changed our meeting dates for the remainder of Wreath II, so check your email. With a baby coming the first week in June, I have planned to complete all of our virtues by the end of April and just have a party in May, which means meeting every 2-3 weeks instead of once a month.


Per the request of the official Little Flowers Girls Club ® I have removed the downloadable patch project sheets and practice pages. If you are interested in learning about how I used these documents in my group, please contact me directly.
Posted by Jenny at 3:30 PM