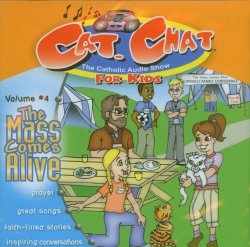 I requested Cat Chat Volume 4: The Mass Comes Alive, because my daughter was preparing for First Holy Communion last spring, and I really wanted to excite her about the Mass. She loves the other Cat Chat CDs we own (I think we have all of them now), so I hoped she would especially enjoy this one.

I was not disappointed! As usual, the creators of this series have presented the Catholic faith in a solid way with songs and stories full of contagious enthusiasm for the Holy Mass! If you have never listened to Cat Chat before, you should know that the entire show is presented as a father teaching his children about the faith. This simple but ingenious way of presenting the audio show always makes me feel like I am sitting in the Millers' living room, benefiting from a loving parent guiding his beloved children.
The stories are real and meaningful to my children, ages 5 and 8, and even to me! On this show, there is an excellent explanation of the Creed and beautiful reminders of the Real Presence of Jesus in the Eucharist. My enthusiasm for the faith (and for teaching it in a way that will excite my children) is definitely renewed whenever we listen to a Cat Chat CD.
The quality of the music continues to amaze me, compared to some other Christian songs for children. These songs are catchy, memorable, and beautifully sung, not at all irritating to adult ears. I especially enjoyed "Come Live in Me," since my original goal was preparation for receiving Jesus in the Eucharist.
The Mass Comes Alive is now a favorite in our van, and we enjoy the sincerity of the programs so much that we feel like we are a part of the Miller family! It helps, I'm sure, that we have a cat just as tenacious as Moses!!!
Also, I was excited to see that they have a Catholic Vacation Bible School program based on this audio show called "Marvelous Mystery!" I will be looking into that for next summer!
You can purchase this CD here.
I wrote this review of Cat. Chat Volume 4 for the Tiber River Blogger Review program, created by Aquinas and More Catholic Goods. For more information and to purchase, please visit Aquinas and More Catholic Goods.
Tiber River is the first Catholic book review site, started in 2000 to help you make informed decisions about Catholic book purchases.


I receive free product samples as compensation for writing reviews for Tiber River.
Posted by Jenny at 10:36 AM 2 comments:

Email ThisBlogThis!Share to TwitterShare to FacebookShare to Pinterest
Labels: reviews

I am popping in for a moment to share a funny story and to let you know I'll be scarce this week, as I try to take my own advice, avoid being a hypocrite, and actually write some lesson plans before diving into this semester! Then, the posting should be more regular again! 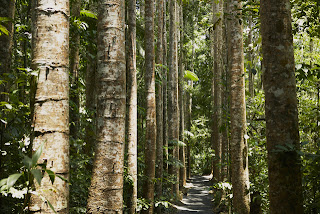 Yesterday, we had some friends over to decorate graham cracker gingerbread houses, an annual tradition in our family. The children were playing outside in our woods when one came with a bucket of dirt to get water from the hose. I told the child we were not playing with water today. It was cool and damp, and we had 15 children running around at that point.

My daughter came next, supposing the rule might not apply since this was her house. Surprise! I still said no. A bit later, they started asking if they could go inside to get drinks of water. When I noticed they were bringing their cups outside to the woods, I quickly declared no cups outside, please!

A few minutes later, one of the boys came out with his water bottle brought from home. I had said no cups - smart kids! We sent it inside and told the children to drink all drinks inside. What sent me into fits of laughter was the next (and final) step.

My daughter and another friend went in for a drink, came out running to the woods with puffy cheeks and tightly sealed lips, promptly spitting their stash into the waiting bucket of dirt. They got mud, and our final insistence that water not be used in any way shape or form outside today was pointless as they glued together the collected rocks with their concoction, effectively making a mud house!