These ideas were developed by me for my local group and are not a part of the official Little Flowers Girls Club ® created by Rachel Watkins. To purchase the excellent materials and begin your own local group, please visit www.beholdpublications.com

What fun we had at our November meeting! I am posting the notes a week later than I hoped, but Thanksgiving week was a bit rough around here. Our virtue for November was Courage, and we learned about Blessed Margaret Pole. Here is what we did...

As usual, we gathered for prayers and began with our offering, my spontaneous prayers, and a Hail Mary. I had forgotten the song sheets, so we skipped our St. Therese Song to my dismay. Then, I went right into presenting the virtue.

I asked the girls what courage means. We talked about some ways you can show courage and some people they know who show courage. I reminded them that courage is NOT about just being different but in choosing to do the right thing. We talked for a few minutes about people who make difficult choices that are the wrong choices, and how those people are not courageous.

Then, I told them the story of David and Goliath from the Bible to remind them how we can have courage. I had found these three (1 2 3) songs written by Steve Case and read them like a very long poem to tell the story of David. This was great, because it kept the girls' attention, as every once in a while, I paused and let them guess the missing rhyming word! I stressed how David took five stones but only had to use one, because he knew God was on his side. We also discussed how David was probably afraid of Goliath (and should have been) but faced him anyway. I wanted the girls to understand that we should be afraid of some things and that there are some fears we should face with courage.

Next, I asked the girls to share specific examples of when they showed courage. This was wonderful. I reminded them that it takes courage to be yourself and to be the Christian God created you to be. We talked about how their families are courageous for homeschooling and being devoted to their Catholic faith, because sometimes it's not easy to do these things. But, of course, it is the right thing to do. I also reminded the girls that the way to grow in any virtue is to practice that virtue, so they must find ways to be courageous in order to be stronger.

The flower for this virtue is the yucca flower. It is mentioned that the yucca plant is one of the hardiest plants that blooms and grows in desert climates. Just like courage that grows under difficult situations, the yucca flower blossoms without much water and under a very hot sun.

Next, we went to the craft tables and made our craft of David's Bag of Stones. For this, I bought these simple canvas bags at Oriental Trading Company. We decorated the bags with fabric markers and fabric paints and then put five neutral colored pom-poms in the bags. I encouraged the girls to write courage or draw something that would remind them of David relying on God to be courageous, so they would remember the meaning even when the pom-poms are gone. I thought these turned out really cute! 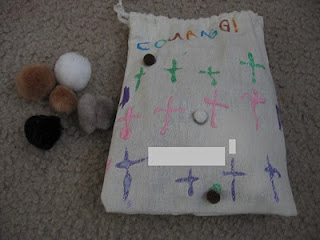 Next, the girls went with a mom to their small rose groups to different corners of the room. They were each given a piece of scrap paper and something with which to write. Each girl was told to write or draw all the things of which they are fearful. After the girls were all done writing or drawing, they crumpled up their papers all as a group and said "God is with me!" to remind them to conquer their fears. I had taped up the face of a giant very high on the wall to represent Goliath. So, then, they took turns throwing the crumpled fears at Goliath's head to see if they could hit him, also saying "God is with me!" as they threw the paper. This was simple, but the girls really seemed to enjoy it.

We took a snack break next. Then, we played my improvised version of Marco Polo. I took three girls, one from each rose group and had them start with their eyes closed as the Marcos, but their job was to say, "God is..." The rest of the girls (Polos) had to say, "with me!" as they tried to stay away from the Marcos. When a "God is..." tagged a "with me!" the "with me!" had to close her eyes and become a "God is..." until everyone was caught. I also turned off half of the lights to remind them not to be afraid when they cannot see. This was a hit! The girls really seemed to have fun with this simple game!

Next, we sat down again and talked about Blessed Margaret Pole. First I explained why she is not called Saint Margaret Pole, since she lived a life of virtue and was a martyr but no miracles are necessarily attributed to her intercession. I explained about her noble history, growing up in a castle and such and being related to kings and queens. She married Sir Richard Pole, which made her Lady Pole, and she became a lady in waiting to Queen Catherine and later the governess to Princess Mary Tudor.

Some of the girls were familiar with the concept that King Henry VIII did not like Catholics, but I only briefly mentioned it was because he wanted to marry another woman, saying that he wanted to be more important than the Pope. We talked more about how he started killing the Catholics and imprisoned Blessed Margaret, eventually having her beheaded as an old woman. I stressed that she was known as a very virtuous woman and prayed for her murderers before her death. We agreed that all the martyrs showed great courage.

The girls returned to the tables to make their Courage virtue pages. This went much more smoothly than last time, except for two glitches on my part. I had one too many quotes to fit on the page, so some girls just left them off or put them on the back. Also, some generous moms make my copies for me after I email them the files, and the font I used for the word Courage came out as nonsense. So, we gave the girls blank white paper to write courage and helped the littlest ones write theirs. It worked. 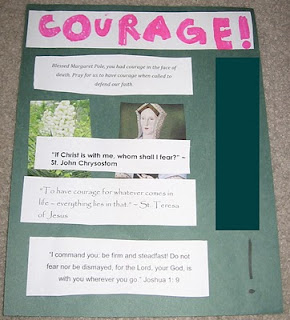 Finally, we gathered to sing the Scripture song for courage and close in prayer. We all prayed the St. Therese Prayer, and I read the girls' prayer intentions, including an adorable one about the "pig flu," that made us all giggle. We asked our saint friends to intercede for us, and then, I passed out Mercy patches to those girls who had turned in their patch project sheets at the beginning of the meeting. As they left, the received the patch project sheet and practice page for Courage.

Our next meeting in December will be on Joy, a perfect virtue to discuss as we approach Christmas!


Per the request of the official Little Flowers Girls Club ® I have removed the downloadable patch project sheets and practice pages. If you are interested in learning about how I used these documents in my group, please contact me directly.
Posted by Jenny at 2:21 PM

I will use this idea regarding David and Goliath at the Little Flowers group at church. Your idea came in handy, and I am sure the girls will love it.
Thank you and God Bless.

Do you have the actual notes that you went by? I use a lot of your material, and was wondering if went by notes, or just did this off the cuff?

Brenda, I might have the notes, but I will have to dig for my old CD-ROMs. Can you please email me at heartofamotherblog at Gmail dot com? I will be happy to send you whatever I find!

Brenda, I finally found all the Courage notes. It's been a bit crazy over here, so I'm sorry for the delay. Send me your email address, and I'll shoot them to you (and any other meeting notes you want)! You can write me at heartofamotherblog at gmail dot com